In 1985, Priscilla Moore began baking cheesecakes using a time tested family recipe in her home near the village of
Canadensis in the beautiful Pocono Mountains. She soon sought to convince local chefs to try her product and after receiving a thoroughly positive response a business was born! After a few months a retail outlet opened on route 390 in Mountainhome, PA and within the first year the response was so overwhelming that she decided to expand to the current location on route 611 in Swiftwater. By 1994, after several additions, she more than doubled the original size of the baking and retail space.
Through the years the Pocono Cheesecake Factory became one of the “must try” attractions in the Poconos. In 2007, Priscilla decided to retire and asked her long time friends Al and Carole Johnson to carry on the tradition of uncompromising quality and freshness. They agreed and since then have been continuing to bake using the same classic recipe and providing a customer service experience that is second to none. 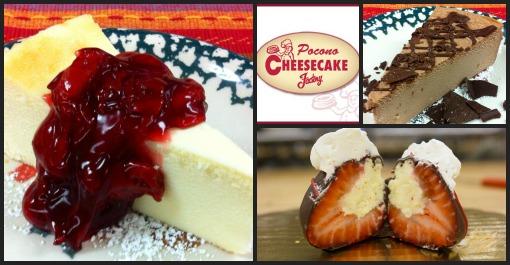